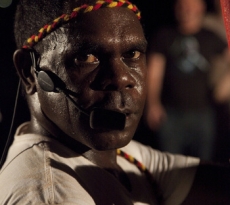 The leader of the Young Wägilak Group. Benjamin grew up in Ngukurr and is the Grandson of artist Djambu (Sambo) Burabura, who taught Benjamin about ceremony and culture. Benjamin is a ranger in Ngukurr and is responsible for traditional ceremonies in Ngukurr and the surrounding region as far as Groote Eylandt. His wife is Marcia and his children are Maxine, Talysha, Rodney and John.

Benjamin’s grandfather, Barrabarra, was a revered community leader, until his death in 2005, and a highly regarded painter, singer and ceremonial leader. He passed on to Benjamin a deep conviction in the importance of culture in the maintenance of the well-being of individuals and communities. Barrabarra was the person who gave permission for the AAO to work with the Wägilak song men.

The Wägilak Gujarra/Nyilapidgi (stone spear group) are leaders in the performance of Wägilak manikay or song cycles and dance. This Young Wägilak Group is based in Ngukurr, NT, from where they travel to outlying regions to perform their roles in various ceremonial functions. Through their performances for Crossing Roper Bar they have allowed people further afield to learn about their culture while showing a way forward for young people wishing to engage with the traditions of the living Elders and their ancestors.